The Promise Pegasus R4i is a four-drive hardware RAID array that can easily slide into your Mac Pro thanks to its MPX form factor. Adding the R4i to your Mac Pro instantly gives you a ton of on-board storage via four 8TB drives set up by default in a RAID 5 configuration.

Does the Promise Pegasus R4i produce good performance results? Is it easy to install? Does it stay relatively quiet? How does it compare to a standalone Promise Pegasus? All of these questions and more are answered in our hands-on video review.

Inside the box, you’ll find some instructions, along with the Promise Pegasus R4i. There are no power cables, or Thunderbolt 3 cables required because the unit directly connects to your Mac Pro logic board via the PCIe and MPX connectors.

The unit features four 3.5-inch drive bays with four 8TB 7200rpm Toshiba MD06ACA800V surveillance SATA HDDs pre-formatted and pre-installed. These drives can be found individually in the high $300s, which means this unit contains around ~$1400 in drives alone. Promise says that it will eventually offer the R4i in differing storage capacities. The R4i is designed with two drive bays stacked on each side, with a locking switch to lock each pair of drives in place. Unlocking the bays allows you to remove and replace a drive with ease, thanks to a handy rail system that guides the drives along tracks that allow it to meet the connector at the rear of each individual bay. Without the four drives, the R4i doesn’t weigh much, but that weight quickly balloons to nearly 10 pounds with the four drives installed. This means an additional 10 pounds added to an already heavy Mac Pro. Those $400 wheels are starting to look better and better each passing day. The internal MPX Module presents one of the biggest advantages of the Pegasus R4i over standalone external setups. Because the R4i is internal, there are no Thunderbolt 3 or power cables to deal with. On a few rare occasions, I’ve accidentally unplugged the wrong Thunderbolt 3 cable, causing my Final Cut Pro X library stored on my DAS to go offline mid-edit. Although you’ll usually be able to recover from such occurrences in Final Cut Pro, it’s still scary when it happens. Removing the cables means one less possible point of failure to worry about. The R4i comes preconfigured in a RAID 5 setup, and that’s how I recommend using the unit. RAID 5 provides much-needed redundancy so that if one of the drives fails, you can replace it with a spare without losing the whole array. For the record, I’ve never had a drive fail in all of my years of using Promise products, but it happens, so it makes sense to use a RAID config with built-in redundancy. The downside of RAID 5 is that you lose the equivalent of one unit of storage outright. So if you have a four-bay unit with four 8TB drives, your 32TB is reduced to 24TB. It’s a significant drop, but 24TB is still a lot of storage to have on tap inside the Mac Pro. Speed wise, the Pegasus R4i is relatively fast. Promise notes that users can experience up to 680 MB/s in RAID5, which is largely what I experienced when running speed tests and file transfer tests. It’s more than enough for 4K workflows and higher. 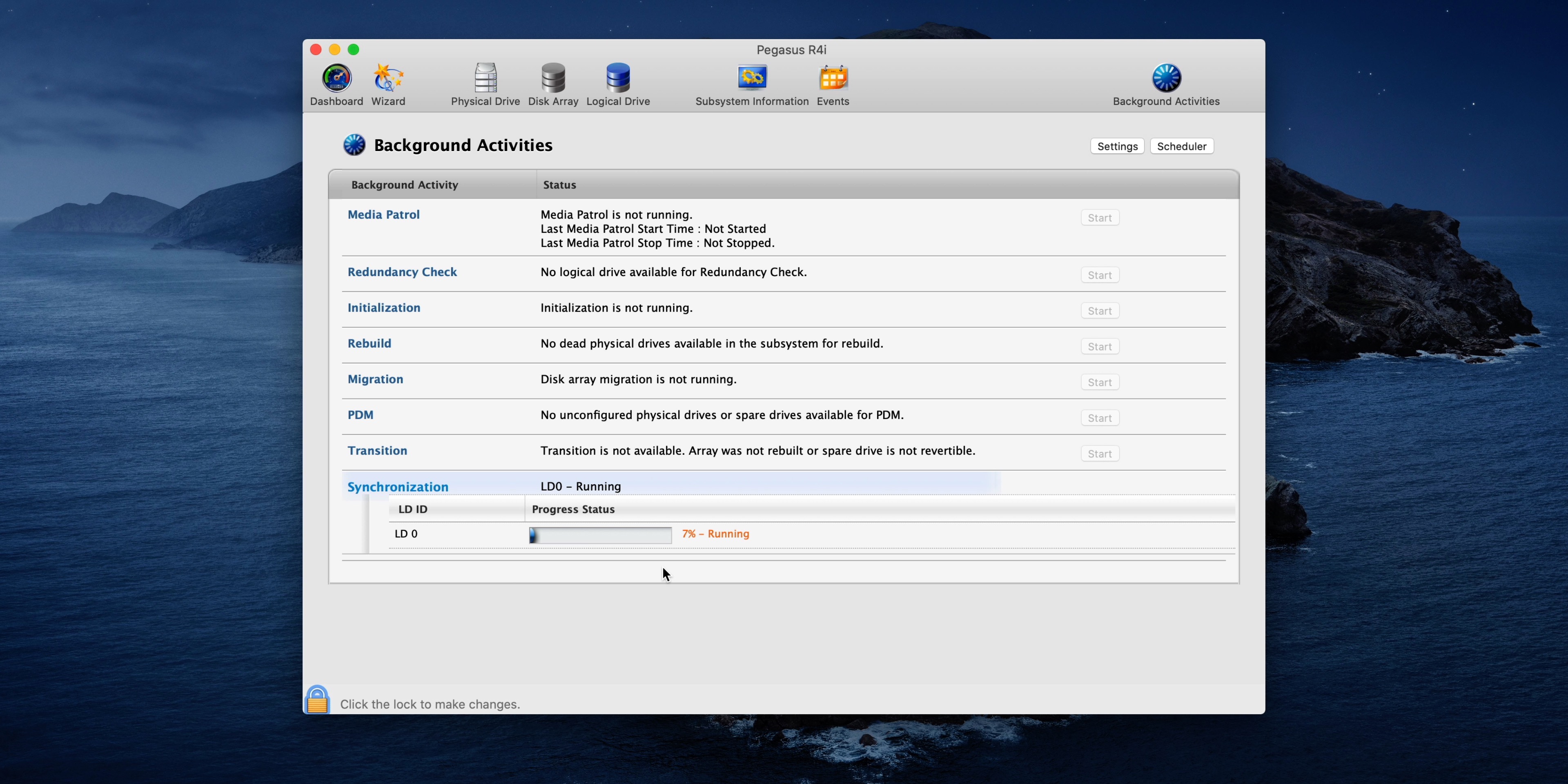 Although you obviously won’t get the same sort of speeds that you get from Apple’s built-in SSDs or third-party PCIe SSD solutions, flash storage simply cannot compete with the sheer amount of capacity offered by traditional spinning hard drives. If you edit video or do anything else that deals with massive file sizes, having a setup like this inside your Mac Pro can be a huge time saver.

Managing drives inside the R4i is similar to managing drives in any other Promise Pegasus storage solution. Each pair of drive units can be locked into place, and individual drives can be removed and replace in the event of a drive failure. While it’s not the most straightforward example of app design, the Promise Utility has all of the tools you need to manage your array. You can use it to reconfigure to a different RAID level, monitor drive temperature, manage drive alarms, and view system logs.

What’s funny is that the drives appear to have LED indicators to identify each drive via the Promise Utility, but since you can’t have the Mac Pro booted with the cover off, you can’t take advantage of such a feature. Compared to standalone Promise arrays, such as the Pegasus3 R6, the sound difference is night and day. The R4i has one major advantage over standalone Promise products, in that it outright lacks any sort of active cooling solution. Instead, the drives rely on the built-in thermal management system of the Mac Pro to remain cool, which means that they are dead quiet from an active cooling perspective. That’s not to say that the R4i is inaudible, because you will still hear normal chatter from the hard drives as the heads read and write data. A lot will depend on the type of drives used, as some drives are inherently louder than others, but the ambient noise from the Toshiba drives inside the unit is pretty quiet. Make no mistake, you can hear the drives as you scrub through a Final Cut Pro X project, or transfer files to and from the device, but I personally don’t find it to be loud enough to be an annoyance. My Mac Pro rests about 3 feet away on the hardwood floor, and I can’t hear the unit at all while playing back music on my Final Cut Pro timeline at 50% volume via the speakers in my LG UltraFine 4K Display.

The Promise Pegasus R4i is a great way to add a massive amount of storage to your Mac Pro. Because it’s an MPX Module, installation is extremely simple, with no configuration required. Out of the box, the unit is configured in what I believe is the most sensible RAID solution for storing working media — RAID 5. If you manage large video files that require having multiple terabytes of storage on hand, then the Promise R4i, at $2299.95 directly from Apple, is worthy of your consideration.

Ultra-slim bezels: worth sacrificing a webcam on an iMac? GL-NEWS